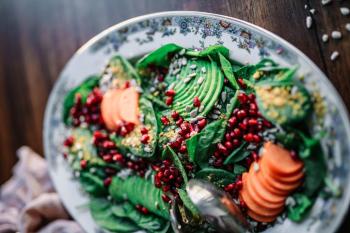 Iodine intakes are most likely to be insufficient among vegans, according to a new study published in Nutrients, which examined the iodine status of different Norwegian population groups.

The probability of sufficient iodine intake from food and supplements was lowest (14%) in vegans, reported the research team, a collaboration between  Oslo Metropolitan University, the Norwegian Institute of Public Health and the  National Institute for Health and Welfare, Finland.

Children had the highest likelihood (82%) of meeting Nordic Nutrition Recommendations (NNR) 2012 for adequate intake according to reported food and supplement consumption.

“The elderly, pregnant women, non‐pregnant women of childbearing age and vegans had median UIC below the WHO cut‐off and had the lowest probability of adequate iodine intake,” commented first author, Anne Lise Brantsæter, researcher at the Division of Infection Control and Environmental Health, Norwegian Institute of Public Health.

The study included 157 females and 120 males. The participants were a diverse group of age ranges including children as young as three years, adolescents, adults and the elderly. The study also included pregnant women and 44 vegetarians (of whom 19 were vegans).

Food and supplementary components were added to give total iodine intake. The researchers also measured urinary iodine concentrations (UIC) and correlated them against intakes from food and supplements.

Milk products and yoghurt were the main source of iodine for all subgroups in the study, except vegans, contributing around 40-60% of iodine from food, the researchers noted.

“Higher consumption of milk and dairy products in younger age groups explains why children are iodine sufficient while their mothers are not,“ elaborated the researchers.

In vegan participants, the main source of iodine was derived from supplements.  On average, supplements provided 147 micrograms/ day (ug/d) of iodine. There were 12 cases of excessive iodine intake. The three participants with the highest UIC levels (two vegetarians and one vegan) all reported using kelp supplements.

The iodine content of kelp supplements can vary widely and can often provide doses significantly above safe levels (defined as UIC at or above 300 ug/litre),  the researchers cautioned.

“Vegans clearly rely on iodine supplements to secure recommended iodine intake. However, the form of supplements must be considered and our finding of UIC values above 1000 μg/L in kelp‐supplement users highlight that standardization of the iodine content in kelp supplements is problematic.

Because there is large variation in the iodine content in different types of kelp, kelp‐supplements should be avoided,” warned Brantsæter.

The researchers advised caution on interpretations of the results as the size was small and the study population was not nationally representative of Norway as a whole. However, they suggested that the results highlight the importance of ongoing monitoring of iodine intake.

“Although the results must be interpreted with caution, this study confirms the need for the monitoring of iodine intake and status in nationally representative samples of the Norwegian population,” concluded Brantsæter.