Mothers who eat healthy fats from oily fish may help their children form healthy guts and prevent them from gaining weight. This new study shows that in laboratory mice, pups gain less weight on a high-fat diet if they are born to a mother who has more omega-3 fats in her body.


Mothers who eat healthy fats from oily fish may help their children form healthy guts and prevent them from gaining weight. Our study, published in Microbiome, shows that in laboratory mice, pups gain less weight on a high-fat diet if they are born to a mother who has more omega-3 fats in her body. We also found that mice gained less weight if they breastfed from a mother with more omega-3 fats. Interestingly, this only happened in male pups; the mother’s fats had no effect on weight in female pups. This has been shown beforein humans and may be due to the effect of female sex hormones on fat metabolism.

The modern Western diet is deficient in these healthy omega-3 fats, which are found in oily fish, nuts and seeds. Humans can’t produce these fats in their body and need to get them from their diet. Instead, the Western diet is overloaded with less healthy omega-6 fats, which are found in vegetable oils (corn oil, soybean oil, sunflower oil) and fried foods, such as chips and crisps. This imbalance in dietary fats may contribute to obesity, heart disease and other chronic diseases. But, prior to this study, little was known about how a mother’s omega-3:omega-6 ratio affected her child’s health.

For the study, we used mice that can naturally produce omega-3 fats and compared them with control mice that couldn’t. All mice in the study were fed the same diet; the only difference between the groups was the omega-3 levels in the mother’s body tissue.

As well as changes in weight, the balance of omega-3 and omega-6 fats in the mother’s body also affected the health of her babies’ guts. If a mother had more omega-6 fats in her body during pregnancy or breastfeeding, her babies’ guts were more permeable, meaning that the barrier of intestinal cells was “leaky”. This also led to an increase in an inflammatory chemical called lipolysaccharide-binding protein.

These pups also had more unhealthy bacteria in their intestines, which may have contributed to their weight gain. However, if these pups were breastfed by a mother with more healthy omega-3 fats, their guts were healthier and had more healthy bacteria inside them. What’s more, the effect of a mother’s fat on her babies’ gut health continued into adulthood.

Your gut microbes, collectively referred to as the “gut microbiota” or “gut microbiome”, play an important role in weight and metabolic health. Certain species of bacteria are more efficient at harvesting energy from the diet and therefore can contribute to weight gain if they are overly abundant. On the other hand, some species are more efficient at maintaining a healthy gut. One of these healthy bacteria is called Akkermansia, which was higher in pups born to and breastfed by mothers with higher omega-3. Akkermansia has been associated with weight loss in humans.

These results suggest that, if a mother eats more omega-3 fats and less omega-6 fats during pregnancy and breastfeeding, she may be able to help her baby maintain a healthy weight. It may also help the right types of microbes grow in her baby’s intestines and form a healthy gut for later life.

This study was performed in mice, however, so more research is needed to understand if it translates to humans. 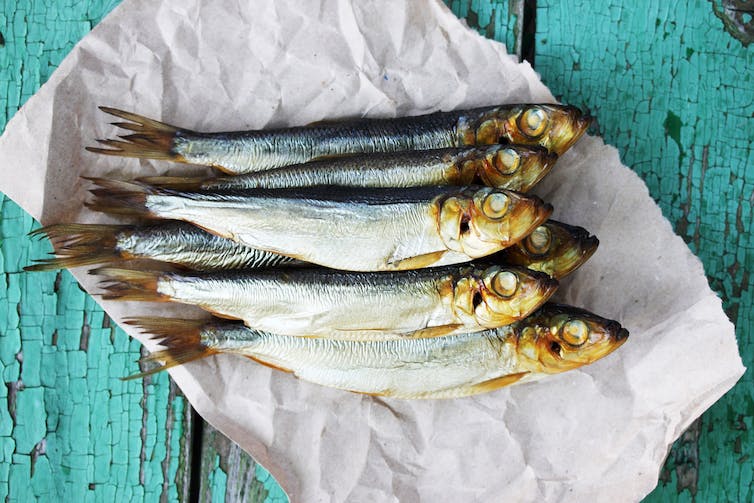 A good source of omega-3. Malivan_Iuliia/Shutterstock.com

There have been previous concerns about pregnant women eating too much fish due to the potential dangers of mercury. But this is only a concern for certain types of fish, particularly predatory fish such as shark, swordfish and certain types of tuna.

Government guidelines suggest that everyone, including pregnant women, eat two portions of oily fish (mackerel, salmon, sardines, trout, herring) per week. The latest evidence also suggests that the benefits of omega-3s from oily fish far outweigh the risks of mercury, if kept to two to three portions per week. And important benefit is the balance of fats. Aim to get enough omega-3s from oily fish, nuts and seeds while, at the same time, reducing omega-6 intake from vegetable oils and fried foods.