2 June 2018 - The Conversation - Eating disorders are hard to overcome, but ditching diets is crucial

Eating disorders affect at least 30 million Americans and have the highest mortality rates of any mental disorder. Those who survive eating disorders often have a long, difficult journey ahead of them.


Eating disorders affect at least 30 million Americans and have the highest mortality rates of any mental disorder. Those who survive eating disorders often have a long, difficult journey ahead of them.

Eating disorders are classified as mental illnesses characterized by severe disruptions in eating behaviors. In our diet-focused culture, many people may not realize that eating disorders still take a huge toll.

The most important action that a person can take to recover from eating disorders is to stop dieting. Weight loss dieting is the number one cause of eating disorders, binge eating, body dissatisfaction and low self-esteem. In contrast, weight-neutral self-care approaches – that is, focusing on maintaining one’s current weight – have been found to assist in eating disorder recovery.

But ditching the diet is only the first step. It is necessary to investigate and address factors that maintain eating disorders.

Many people in partial recovery from eating disorders still rely on behaviors that help them feel safe, or less anxious, about their weight or appearance. These so-called safety behaviorscan vary but might include monitoring food intake, monitoring weight, double-checking nutritional values, being very careful about food ingredients, and avoiding eating in social situations.

The short-term anxiety-reducing benefits of safety behaviors are part of what makes them so hard to eliminate. Unfortunately, safety behaviors create a distraction and leave the eating disorder itself unchallenged. 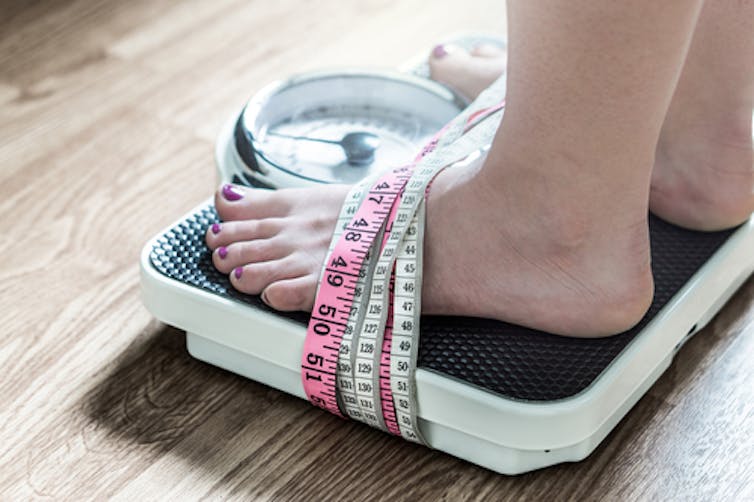 Weighing oneself often becomes a trap for those with eating disorders. Tero Vesalainen/Shutterstock.com

Self-weighing is a safety behavior that maintains the overvaluation of weight, which is part of the American Psychiatric Association’s definition of eating disorders. Continued concern with weight or shape at the end of treatment has been found to be a strong predictor of relapse back into an eating disorder. A powerful strategy to reduce overvaluation of weight is to consider a personal 30-day “no weigh” experiment.

Other safety behaviors that aim at gaining information about one’s shape or size – such as mirror checking, pinching the fat on one’s torso, feeling muscles or bone, engaging in social size comparison, and seeking reassurance from others about one’s body – all have to be considered for elimination. Each one of these examples can be a safety behavior that serves to maintain undue concern with one’s weight and shape, and in turn, keeps the eating disorder alive.

Practicing self-trust around eating means giving oneself unconditional permission to eat when hungry, whatever foods are desired, in the amount desired. Research has shown that unconditional permission to eat is the exact opposite of an eating disorder. It can be anxiety-producing to give oneself unconditional permission to eat, but it turns out that any kind of food rules, including limits on when, what and how much to eat, led research participants to be more preoccupied with food. Food rules prompted participants to have a much higher tendency to overindulge, especially when they broke one of their food rules. On the other hand, research participants who allowed themselves to eat when hungry and to choose foods and amounts they desired had a lower tendency to overindulge or engage in binge eating.

Trusting one’s body to direct eating choices is one aspect of self-trust. Self-trust also extends to many other self-care practices.

A person’s individual relationship with their own body is the “doorway to pathology”, meaning if that relationship is not a positive one, a person is at risk of developing an eating disorder. In order to fully recover from an eating disorder, this doorway must be filled with positive self-care practices. People in recovery can learn to engage in self-care practices that do not contain any elements of self-harm.

Overindulgence in food contains both elements of self-care and self-harm. Self-care involves tuning in and listening to body signals and responding in helpful ways. For instance, being “tired” could elicit telling yourself to “rest a bit” or “turn off the light and go to sleep now.” The feeling of being “very uncomfortable” could signal it’s “time to change this situation,” and the feeling of being “overwhelmed” could mean it’s “time to take a break” or “time to make a list,” depending on the situation.

These responses are all dependent on the assumption of self-trust. One has to trust that the body does not lie. Our bodies tell us what we need to know and responding to their messages can help us to fully recover from eating disorders

It can feel scary to let go of safety behaviors and to replace them with self-care based on self-trust. Change is inherently risky. But for positive change to occur, it is necessary to take some risks. And it is worth it, because full recovery involves more than just letting go of eating disorder and safety behaviors. It also involves feeling better about oneself.

Taking risks to trust one’s body and to engage in responsive self-care are almost guaranteed to lead to an improved self-concept. Taking these risks can be anxiety-producing in the short run but worth it, to reach full eating disorder recovery.