9 July 2018 - The Guardian - Flying high: kids in the UK are wild about energy drinks - but how harmful are they?

UK children consume energy drinks at a higher rate than kids in any other country in Europe - with a fifth of three-10-year-olds having them regularly. Is this a health risk, or no worse than coffee?

Web URL: Read the article in The Guardian here

See here for more articles on the energy drinks controversy.

When Red Bull launched in the UK in 1994, with its odd, cough-linctus flavour and novel billing as an “energy drink”, students and clubbers went mad for the stuff. The brand quickly became a cheap and legal staple for staying up all night. A quarter of a century later, the energy drinks market is still growing and flooded with Red Bull competitors such as Relentless, Monster Energy and Emerge. And it is no longer just young adults guzzling them to study or rave into the small hours; these brands are catnip to children.

Mintel consumer usage data starts at the age of 16, so, officially, the biggest UK market for energy drinks is boys aged 16-24, with 63% indulging (as opposed to 58% of girls). But, according to European Food Safety Authority (EFSA) research, two-thirds of 10-16-year-olds regularly consume energy drinks, along with 18% of three-to 10-years-olds. In 2017, public health researchers from the Centre for Translational Research in Public Health asked secondary-school children in north-east England about their consumption of energy drinks. “Sometimes, it’s sleepover day,” said a boy in the 10-11-year-old age group. “So you go to the shop, get energy drinks and you go in your house and you just play on your Xbox.”

Energy drinks are classified as soft drinks containing more than 150mg of caffeine per litre. Many brands, however, including Monster, Rockstar and Red Bull (still the world’s bestselling energy drink) contain more than twice that amount. While, at about 300mg per litre, this is less than filter coffee (about 400mg per litre), the drinks are way more quaffable to children. The ESFA say just one can of some brands could exceed their recommended daily caffeine limit for children.

Amelia Lake is a reader in public health nutrition at Teeside University and co-author of the 2017 study for which school children were interviewed. “Coffee is very different,” she says. “It’s hot, not necessarily full of sugar and you can’t gulp it down. You can’t have three or four one after another, like you can with these drinks.” With highly palatable flavours such as tropical fruits and blueberry, they are to coffee what alcopops are to vodka.

The “full-fat” versions usually contain a little more sugar than regular soft drinks, but the calories in energy drinks are often viewed as more acceptable – an active ingredient. So at a time when traditional sugary soft drink sales have slowed, thanks to obesity campaigns, the UK energy drink market grew 19% between 2012 and 2017, to 669m litres, and is valued at £1.65bn. Sales in high-sugar varieties are currently on a par with lighter versions, although, according to Alex Beckett, associate director at Mintel food and drink, “the big brands have invested in zero-sugar recipes and that’s what’s really driving the market”.

Lake says that the health concerns don’t stop at sugar and caffeine. “There’s the cocktail of the other things in these drinks – the guanine, taurine, various other what are called healthy ingredients. We don’t have a lot of evidence about what the combination does to adults or children.” Taurine is an amino acid found in meat and fish that is claimed to enhance concentration (among its many other biological functions), especially when combined with caffeine and guanine – a stimulant derived from the South American guarana plant. 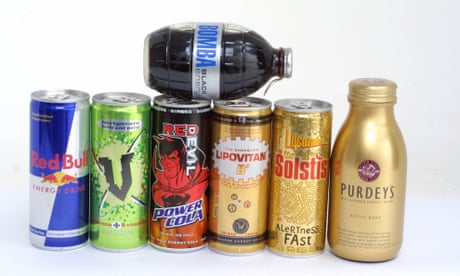 In 2016, Lake and colleagues reviewed the academic literature on energy drinks from Europe and the US. They found associations between consuming the drinks with symptoms including headaches, stomach aches, hyperactivity, insomnia, fatigue and irritation. There were also higher incidences among energy drink fans of injuries, driving violations and road accidents. In the US in 2010-11, the National Poison Data System received 4,854 calls about energy drink cases. Almost half involved children under six years old, but it was among older children that more grave effects such as cardiac rhythm disturbances and hypertension were reported.

Furthermore – perhaps indicating that the drinks are seen as a legal high for children – several studies in the review found strong links between choosing energy drinks, sensation seeking and other self-destructive behaviours such as binge-drinking, smoking and substance abuse, along with problems with behavioural regulation and metacognitive skills (such as planning and problem-solving). Lake is keen to point out, however, that, short of conducting unethical experiments that involve dosing children up with caffeine in a laboratory, we are having to make do with associations rather than finding any proof of causation.

According to EU labelling guidelines, soft drinks with more than 150mg of caffeine per litre must carry a warning about the high caffeine content and state that they are not recommended for children. But wouldn’t this make the drinks even more irresistible to children? “I don’t think it’s a silver bullet,” says Lake, “but it’s a good first step.” Some of her research was prompted by concerned parent groups. “There was confusion around who and what these drinks are for, with incidences of children having them for breakfast,” says Lake, lamenting that even though “the cans say they’re not for children, we sell them to children anyway”. Energy drink consumption by children in the UK is the highest in Europe.

Research into energy drinks and children is in its infancy, but, says Lake, “when you speak to the NASUWT [the teachers’ union], you realise that it has been an ongoing issue with children and teachers and schools”. A key problem is “the drinks are readily available, acceptable and, while the children were quite aware that the drinks might not be great for you, they weren’t quite sure why”, says Lake. As some of the children pointed out, they could get small cans for less than half the price of a can of Coke, or could club together to make the most of four-for-a-pound deals. 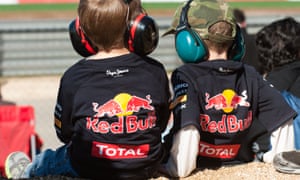 Earlier this year, the major UK supermarkets committed to not selling the drinks to under-16s, but convenience stores and vending machines are ubiquitous. The government has now proposed a ban on selling the drinks to under-16s, to combat childhood obesity. “If you look wider,” says Lake, “other countries have been ahead of this curve for a while now. Some countries have outright bans; some have banned sales to under-18s.”

The health secretary has also proposed a 9pm watershed for junk-food advertising, but the way that energy drinks are promoted is many-tentacled. The brands have forged strong associations with gaming, extreme sports, Formula One racing, clubbing and music, using social media, event sponsorship and web content. As Beckett says, the marketing is “very attractive to young people, with a lot of social media, YouTube channels ... Monster has been very savvy advertising through the gaming world. These are whole other areas of a marketing universe that’s on the radar of young people, but not their parents.”

One boy of 10-11 told Lake and her colleagues that boys think they look “proper rock hard when they have [the drinks] in front of girls”. And a girl of the same age admitted that if a friend has something “really, really nice – an energy drink, like a Monster – but you only have a bottle of water, you’re tempted to get [the energy drink], because it looks cooler”.

What do the children propose we do to save them from themselves? “I think [the drinks] should go in their own aisle, where children are not allowed, like cigarettes,” said another 10-11-year-old girl. “They should all be together and we shouldn’t go in that aisle.”