Eating healthy cereals in moderation can contribute to a balanced diet. However, many breakfast cereals on offer in the UK contain very high levels of sugar. In fact, based on total product weight, some are made up of more than a third of the sweet stuff.

Web URL: Read the article in The Conversation here


Eating healthy cereals in moderation can contribute to a balanced diet. However, many breakfast cereals on offer in the UK contain very high levels of sugar. In fact, based on total product weight, some are made up of more than a third of the sweet stuff.

For children, breakfast cereals can be more than just a morning meal. Because they are quick and easy to prepare, kids tend to snack on them throughout the day too. This popularity means that cereal products are the second main contributor of free sugars (sugars added to food and drink, as well as sugars found naturally in things such as honey or unsweetened fruit juices) to children’s diets. They account for 8% of the free sugars intake in children (four to 10 years old) and 7% in teenagers (11–18 years).

When it comes to sugar discussions, we are frequently told that consuming excess free sugar in food and drink is detrimental to health and increases the risk of obesity, which is associated with greater risks of developing type 2 diabetes, hypertension, coronary artery disease and cancer. However, what is sometimes less discussed in the media is that excess sugar is also a well-established risk factor for tooth decay – which itself can lead to cavities, gum disease and painful abscesses.

For our recently published study, we wanted to look at how breakfast cereals which are high in sugar are marketed to children, and how this impacts on oral health. We were particularly keen to look at how portion sizes are presented on the front of packets, and what this meant for sugar intake.

Using these guidelines, we looked at the packaging of the nine most popular types of breakfast cereals marketed to children in the UK. As it is the most popular of the top nine (according to Mintel marketing reports), we decided to look at Coco Pops in more detail and included all branded and UK supermarket versions of the chocolate flavour cereal. This meant that in total we included 13 breakfast cereals in our study: Cheerios, Coco Pops (and Asda, Sainsbury’s, Morrisons and Tesco supermarket branded versions), Cornflakes, Crunchy Nut Cornflakes, Frosties, Rice Krispies, Shreddies, Sugar Puffs and Weetabix.

What we found was that, at the manufacturer’s suggested portion size, eight of the 13 cereals provided more than half of the recommended daily sugar intake for a child aged four to six years old. But we also found that the images of the portion sizes on the front of the packaging could be misleading for consumers. While manufacturers suggested portion sizes on the packaging, the images appeared to show portions that were at least two-thirds more than the recommendations. 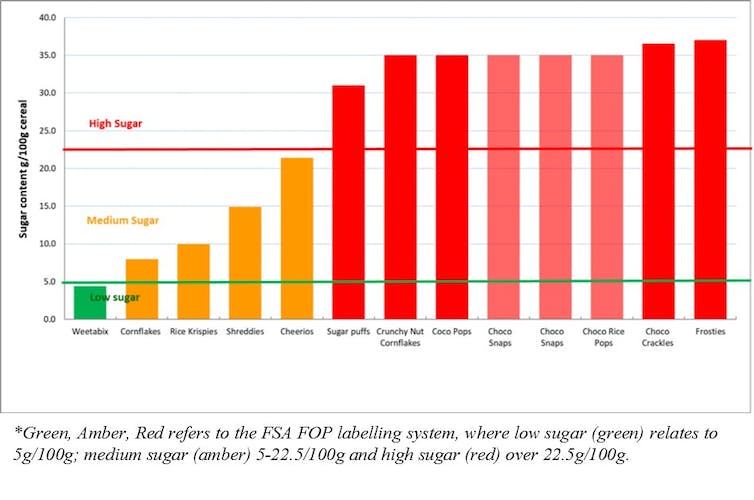 Alongside these deceptive portion pictures were cartoon characters, royal endorsements and QR codes promoting the breakfast cereals, many of which appeared to be targeted at child consumers.

We did find that nutritional claims focused on vitamins (especially folic acid) and minerals (notably iron), whole grains and no artificial colours or flavours, were legitimate on all the cereals. In addition, only two of the 13 cereals we looked at – Weetabix and Sugar Puffs – did not have a voluntary front-of-pack nutrition label (often colour coded into traffic lights). But the problem here is that while legitimate claims about other nutritional constituents in the cereals appear alongside images which don’t depict the manufacturers’ actual recommendation, consumers may think that the products are healthier than they are.

This may not necessarily be a deliberate attempt to mislead consumers, but dentists and other health professionals need to be aware of the high sugar content of these cereals, and the effects of marketing techniques, when giving nutritional advice to children and parents. At the same time, consumers need to be a bit more savvy about their breakfast choices too.

A good breakfast is an important part of the day – and it need not be “boring”. Simply choosing breakfast cereals with less sugar, such as porridge, plain shredded wholewheat and plain wholewheat biscuit cereals, adding some fresh fruit (bananas or raspberries are good) and serving with semi-skimmed milk or natural yoghurt, can make all the difference.