A recent review suggests that a phospholipid form of omega-3 in fish and fish roe may reduce Alzheimer's disease risk in APOE4 carriers.


A phospholipid form of the omega-3 fatty acid docosahexaenoic acid (DHA) found in the meat – and uniquely concentrated in the roe – of certain cold water fishes, may reduce the risk of developing Alzheimer's disease in some people, according to a new review by Rhonda Patrick, Ph.D., published in the FASEB Journal. 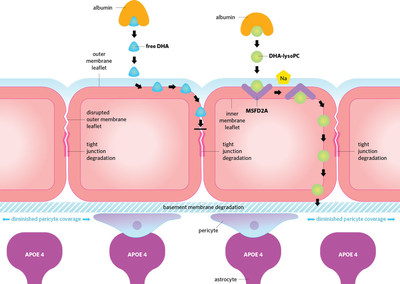 Alzheimer's disease is a progressive neurodegenerative disorder characterized by memory loss, cognitive decline, and behavioral changes. Nearly 50 million people are living with the disease worldwide. That number is expected to triple by the year 2050.

A key risk factor for Alzheimer's disease is the presence of the gene for apolipoprotein E4, or APOE4. "The APOE4 gene is present in approximately 25 percent of the population," says Rhonda Patrick, Ph.D., a visiting scientist at UCSF-Benioff Children's Hospital Oakland Research Institute and the author of the review. "It increases a person's risk for Alzheimer's disease and lowers the age of onset. Having one copy of the gene increases risk 2- to 3-fold, while two copies increase risk as much as 15-fold."

Several critical changes occur in the brain of a person with Alzheimer's disease. The most significant of these include the accumulation of amyloid-beta plaques and the formation of tau tangles, both of which interfere with the brain's normal functioning, and reduced glucose transport into the brain. "Getting sufficient glucose into the brain is essential for preventing amyloid-beta plaque and tau tangle formation," says Patrick. DHA promotes brain glucose uptake by regulating the structure and function of special proteins called glucose transporters located at the blood-brain barrier, the tightly bound layer of cells that limits passage of substances into the brain.

DHA comprises approximately 30 percent of the lipids in the human brain and is essential for brain function. It is also present in the meat and roe of cold water fish, such as salmon, herring, or pollock, and in the oil produced by small crustaceans called krill. It naturally occurs in a triglyceride form and a phospholipid form. Eating DHA-rich fish slows the progression of Alzheimer's disease and improves symptoms in APOE4 carriers. However, some evidence suggests that taking DHA supplements, which largely lack the phospholipid form, does not. "This difference in response may lie in the way the brain transports the different forms of DHA," says Patrick.

DHA-lysoPC and a bypass of faulty transport
The unique structures of DHA's two forms dictate how the body metabolizes them. The triglyceride form can be metabolized to a variety of end products, the most abundant of which is non-esterified DHA. The phospholipid form, however, is metabolized primarily to a product called DHA-lysophosphatidylcholine, or DHA-lysoPC.

The brain relies on different transport systems for shuttling the varied forms of the metabolized DHA across the blood-brain barrier. Whereas non-esterified DHA passes through the blood-brain barrier via passive diffusion, the phospholipid form, DHA-lysoPC, enters via a special transporter called Mfsd2a. Previous studies have found APOE4 disrupts the tight junctions of the blood-brain barrier, leading to a breakdown in the barrier's outer membrane leaflet and a subsequent loss of barrier integrity. One end result of this loss is impaired diffusion of non-esterified DHA. Patrick suggests that the transport system that moves the non-esterified form of DHA into the brain is faulty in people who have the APOE4 variant, putting them at increased risk for developing Alzheimer's disease.

However, the metabolism and transport across the blood-brain barrier of DHA-lysoPC can bypass the tight junctions, providing a better means of DHA transport for people with the APOE4variant, potentially lowering their risk of developing Alzheimer's disease.

To date, research on the effects of DHA in the brains of people with Alzheimer's disease has been based on DHA in fish oil supplements. But this review provides a framework for future clinical research, says Patrick. "When looking at the effects of DHA on cognitive function in people with APOE4-related Alzheimer's disease, it's important that researchers consider the effects of DHA in phospholipid form, especially from rich sources such as fish roe or krill, which can have as much as one-third to three-quarters of the DHA present in phospholipids. That's where we're most likely to see the greatest benefits, particularly in vulnerable APOE4 carriers."