Omega-3 supplements in pregnancy reduce the risk of premature birth

Pregnant women who increase their intake of omega-3 long-chain fatty acids are less likely to have a premature birth, according to a new Cochrane Review, updating initial research carried out in 2006.

This new Cochrane systematic review is an update of an earlier one from 2008 (available here). It includes 70 clinical trials with a total of almost 20,000 participants, and the findings are definitive in showing that dietary supplementation in pregnancy with long-chain omega-3 (EPA and DHA) reduces pre-term birth and associated low birth weight.  For details of this research, see:


Other studies have already shown that omega-3 supplementation during pregnancy would be cost-effective, even considering only the short-term savings in immediate hospital costs.   Furthermore, given that prematurity and low birth weight increase lifetime risks for a very wide range of both mental and physical health disorders, the long-term benefits are likely to be far greater.

Current intakes of EPA/DHA are seriously suboptimal for mothers-to-be in most developed countries, owing to low intakes of fish and seafood. These are the main natural dietary source of these essential brain fats, and also a valuable source of other key nutrients important for brain development, such such as iodine, zinc, Vitamn D, choline and B vitamins.

This new review, showing that supplementation with long-chain omega-3 alone reduces pre-term birth, therefore provides important evidence to support public healh policy initiatives - both for the supplementation of women during pregnancy, and to improve omega-3 status in women of childbearing age more generally.

For more information on this topic, see also the following lists of articles, which are regularly updated:

Pregnant women who increase their intake of omega-3 long-chain fatty acids are less likely to have a premature birth, according to a Cochrane Review published today.

Most pregnancies last between 38 and 42 weeks, but if a baby arrives before 37 weeks, the chances of poorer health for that baby increase. One in 12 babies in Australia are born prematurely – before 37 weeks.

The earlier a baby is born, the higher the risk of poor health, and a small number of babies don’t survive.

Some premature babies have to spend the first weeks or months of life in special intensive care units in hospital. Premature babies can develop conditions that last a lifetime, including problems with their lungs, gut, and immune system, and vision and hearing loss.

Problems with behaviour and learning are also more common in children born too early. These consequences result in substantial costs to health care systems and to families of premature babies.

What did we find?

The Cochrane Review, led by our research team at the South Australian Health and Medical Research Institute, included 70 randomised trials with nearly 20,000 women.

It found increasing the daily intake of omega-3 long-chain fatty acids during pregnancy:

Most of the trials were conducted in high-income countries (Australia, the United States, England, The Netherlands and Denmark) and included women who were both at normal and high risk for poor pregnancy outcomes. Most women studied were pregnant with one baby. 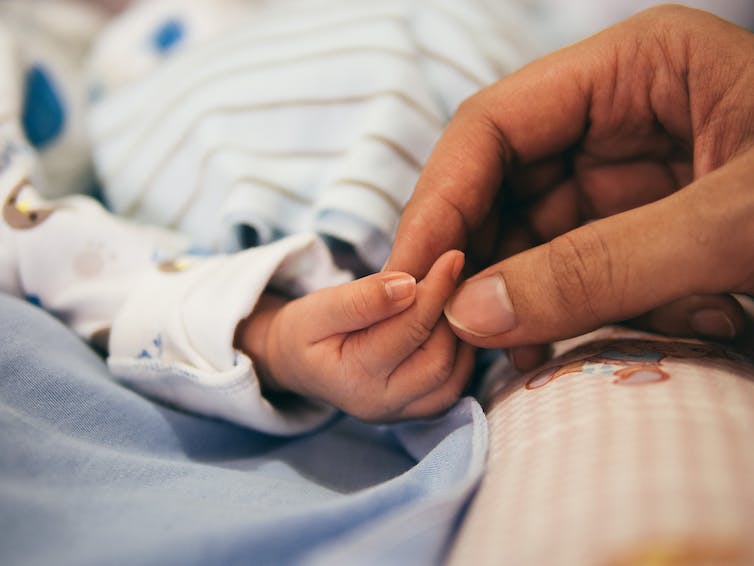 Omega-3 supplements reduce the risk of an early premature birth from 46 per 1,000 to 21. Aditya Romansa

The causes of premature birth are still not well understood. But we know that when a pregnant woman’s labour starts, powerful hormones called prostaglandins take hold.

Sometimes women produce high amounts of prostaglandins, and those produced from omega-6 fats can make birth come too early.

Read more: Despite new findings, the jury is still out on whether omega-3 supplements reduce heart attacks

So where does omega-3 come in?

In the 1980s, researchers noticed women in Denmark had shorter pregnancies and more premature babies than their neighbours in the Faroe Islands who eat much more fish. The omega-3 long-chain fatty acids in fish seemed to be responsible – they are thought to help prevent premature birth by reducing the potency of prostaglandins that can trigger early birth.

Our review shows supplementation with omega-3 long-chain fatty acids during pregnancy is one of the few safe and effective strategies capable of preventing early labour and premature birth.

Most of the trials included in this Cochrane review that reported on premature birth used omega-3 supplements, rather than dietary changes.

It is difficult to get the amount of the omega-3 long-chain fatty acids used in the many trials from food alone, unless you regularly eat fatty fish such as salmon, sardines or mackerel. To get the recommended amount of DHA that was used in many trials, you would need to eat at least two to three 150g serves of salmon every week.

The advice for pregnant women expecting a single baby is to consume daily fish oil supplements containing at least 500mg of DHA, starting at 12 weeks of pregnancy. The supplement does not need to contain more than 1000mg DHA+EPA. There appears to be no extra benefit of higher doses.

This advice is currently being integrated into national clinical practice pregnancy guidelines.

Site by Redstone Websites. Easy to Use Web Content Management. 2023 © All Rights Reserved.