EAT Lancet was released on 16 January 2019, claiming to be the solution we’ve all been waiting for to save your health and the planet. However, on closer inspection of the actual food recommendations, it seems to be largely a continuation of the Dietary Guidelines for Americans.

Web URL: Read the full text of this article on the 'Optimising Nutrition' blog here

This blog article provides a wealth of detailed nutritional analyses as well as background information on the EAT Foundation's recent publication in the Lancet.

Only a small selection of this very extensive article is provided here, but interested readers can access the full version here

For other commentaries on the 'EAT-Lancet' diet, see also:

Rather than being whole foods plant based, the primary focus of the guidelines is on agricultural grains and processed oils that will leave you hungry and joining the growing ranks of our obese, malnourished and diabetic population.

While these new guidelines may help the planet by making you and your children incapable of procreating, they are unlikely to make you healthier, happier or skinnier in the process.

With half the calories coming from carbohydrates in the form of wheat, rice, corn, and soy along with a generous helping of refined oils chemically extracted from corn and soy, the EAT Lancet diet (whether intentionally or by accident) has stumbled upon the perfect formula that will drive you to consume more of the food-like products that the EAT Foundation group of companies (who are generously bankrolling this extravaganza) will benefit from you consuming more of!

There are plenty of opportunities to improve our food system and produce more nutrient dense, high satiety food in a regenerative manner that will reduce our impact on the planet.  However, after reviewing the actual nutritional guidance proposed by EAT Lancet, it’s hard to embrace these new recycled dietary guidelines for the world to lead us out of our nutritional or environmental wilderness.

The EAT Foundation has produced a slick and well-funded PR campaign, including numerous international launch events lined up over the coming months, purportedly to save our health and the world from humanity.

It’s enchanting and emotive narrative!  You would surely feel like you’re doing something good for the planet and yourself if you believe and followed their advice.

However, if I was to put my conspiracy touting tinfoil hat on for a moment I would say that it is hard to separate the climate science, from the animal activism, from the environmental sustainability, from the religious belief from the epidemiological mumbo jumbo, from nutritional science from the commercial interests of the founding companies trying to win the hearts and minds of the consumers.

I can only imagine there is a bit of everything going on here.  We all have our biases and beliefs that we bring to the table in any discussion, particularly when it comes to our food choices.

For more info, you can read the full EAT Lancet report or check out the launch video here(complete with emotive poem by 14-year-old environmental ambassador Penelope).  You would be heartless if you were not moved and motivated by their call to action!

There are many points that I agree with and a number that I don’t.  I’ll leave you to watch and read for yourself and make your own judgement.

There has already been a lot written on the motives and validity of the environmental claims behind the EAT Lancet report so I will not try to duplicate these here.

I first came across the EAT Lancet diet when I was asked on Facebook what I thought of it from a nutrient density and satiety perspective.  So I will try to focus on adding to the nutrition analysis which seems to be remarkably missing.

If you to understand what EAT Lancet is about to enforce with carbon tax like international policies to roll out in every nursing home, school and government influenced institution across the world, I recommend you need to look past all the talk of ‘plant-based’ diets and pictures of fruits and vegetables and examine the detail in this table to see how they are actually planning to shape the international food system.

To help make sense of the recommendations, I plotted them as a pie chart. 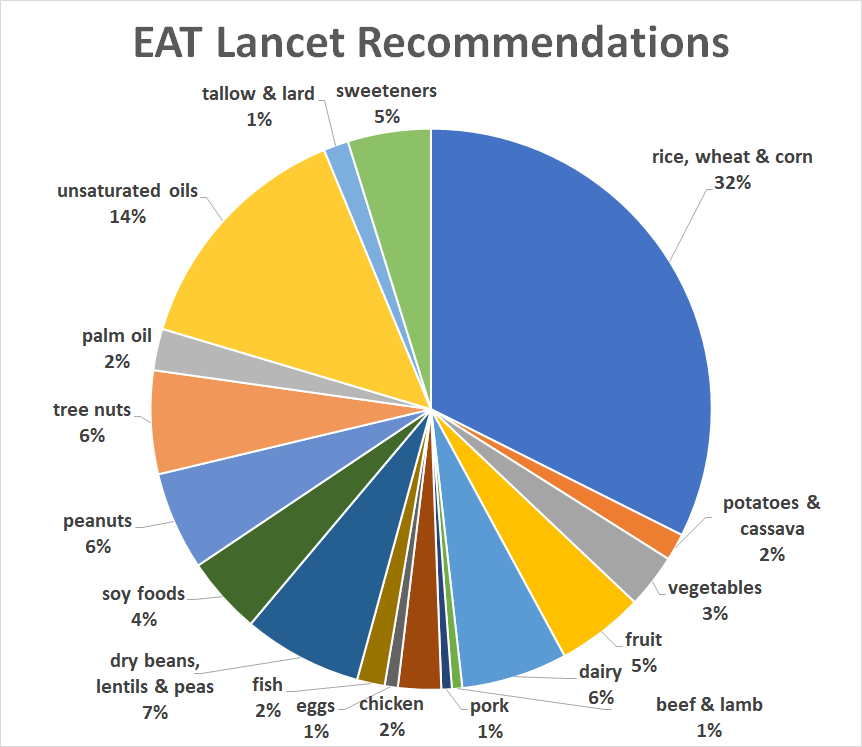 The thing that struck me between the eyes was that the EAT Lancet dietary guidance seems to largely be an extension of the current status quo that is maximising profits for the food industry and driving us to eat more than we need to by focusing on heavily subsidised agricultural grains and the oils we extract from them.  Other than the doubling down on the recommendation to reduce red meat and eggs, it seems like business-as-usual for the food industry.

With Walter Willett at the helm, it probably shouldn’t be surprising that this looks and feels like an extension of the Dietary Guidelines for Americans now proposed for the whole, complete with talk of United Nations level sanctions and taxes to prevent excess meat consumption.

As you can see in the chart below, it’s the added fats and oils (mostly from unsaturated fats) as well as flours and cereals (i.e. rice, wheat and corn) that have exploded in our food system and tracked closely with the rise in obesity of the past half-century.  The EAT Lancet guidelines will only serve to solidify this runaway trend! 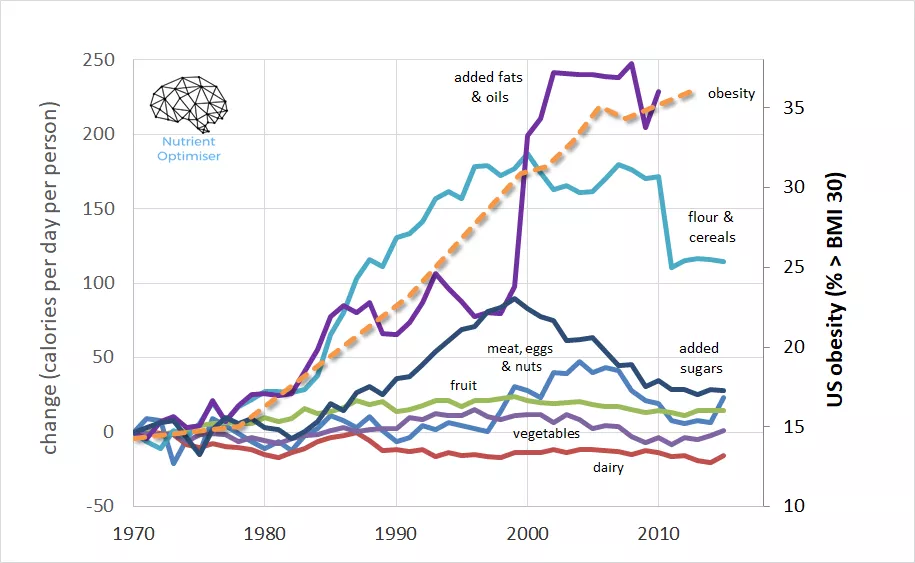 Consumption of red meat and eggs have already dropped over the past 40 years since the introduction of the 1977 Dietary Guidelines for Americans, while poultry has increased.  The Eat Lancet Guidelines admonition to decrease eggs and beef (whether it be for the environment or due to concerns over dietary cholesterol and saturated fat) will perpetuate the downtrend of these foods in our diet. 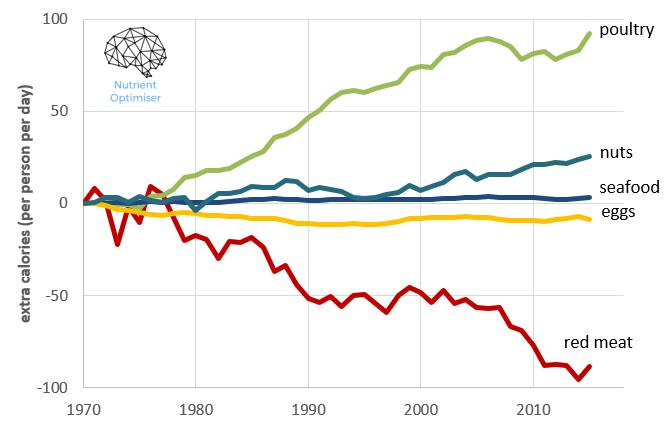 It’s worth noting that, while Walter Willett and friends cite concerns over saturated fat and LDL cholesterol, the reduction in red meat and eggs, and the growth in unsaturated fats clearly has not been helping us in spite of the fervent belief held by many that there is a causal link.


TO READ THE REST OF THIS DETAILED ARTICLE, CLICK HERE