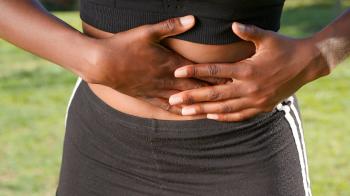 These findings highlight both the high prevalence of meal-related pain and other GI symptoms in adults, and their links with various forms of self-reported psychological distress - particularly anxiety, depression, and other stress-related conditions.

Importantly, these findings come from a conference presentation (so full peer-reviewed publication is still awaited), but they were derived from a large international dataset (from a survey of more than 54,000 people in 26 countries), and involved accepted measures of GI symptoms.

Associations between disorders of the gut and brain are by no means new - but more attention has been paid to these links since research into the so-callled 'gut-brain axis' has shown that gut microbial imbalances can affect brain function, and vice versa.

No mention is made of whether any data were collected on diet - but both psychological distress and pain or other GI symptoms related to eating were more common in younger adults, whose diets tend to contain more ultra-processed foods.  Similar age-related trends were also found in another study linking GI symptoms with poorer mental health, reported at the same conference:


For related articles on this topic please see:


Around 11 percent of the global population (13 percent of women and 9 percent of men) frequently experience abdominal pain when they eat meals, according to a survey on over 50,000 people. The research is being presented for the first time today at UEG Week Virtual 2021.
Pain associated with eating appears to be most common in young people aged 18 to 28, with 15 percent affected, the research found.
Those who experienced frequent abdominal meal-related pain were also more likely to suffer from bloating, a swollen tummy, feeling too full after eating or feeling full up too quickly, constipation and diarrhea. The same group also had more severe psychological distress and somatic symptoms (that were not gastrointestinal).
A total of 36 percent of the people with frequent meal-related pain reported suffered from anxiety compared with 25 percent in the occasional symptoms group and 18 percent in those who never experienced meal-related pain. Those with frequent attacks also reported higher rates of depression (35 percent) compared to 24 percent in the occasional symptom group and 17 percent in the group that never had meal-related pain.
Based on the Rome Foundation Global Epidemiology study, the findings were a result of surveying 54,127 people across 26 countries online. Respondents were asked if they suffered abdominal pain and whether this was related to eating. They were categorized into three groups: those who said their abdominal pain was meal-related more than 50 percent of the time, those who had occasional meal-related pain between 10 to 40 percent of the time, and those who rarely or never had meal-related pain.
Esther Colomier, study author and a joint Ph.D. researcher at KU Leuven, Belgium, and the University of Gothenburg, Sweden, explained, "The take-home message from this study is that people who experience meal-related abdominal pain more frequently experience other gastrointestinal symptoms and more regularly fulfill criteria for disorders of the gut brain interactions (DGBIs, formerly known as functional gut disorders), including common conditions such as irritable bowel syndrome (IBS), bloating and abdominal distension."
"They also have a higher burden of psychological and somatic symptoms, such as back pain or shortness of breath, which are associated with major distress and functioning problems. These symptoms cause distress and disruption in daily life," she added.
Lower gastrointestinal symptoms such as constipation and diarrhea were experienced in 30 percent of those who reported frequent meal-related pain, versus 20 percent in the group who reported occasional symptoms and 10 percent in the no symptoms at all group. The same applied for bloating and abdominal distension symptoms, which were reported as often as once a week in the group who experienced frequent meal pain, compared to two or three days a month in the group with occasional pain and one day a month in the group who experienced no symptoms.
Esther Colomier concluded, "Considering meal-related symptoms in future diagnostic criteria for DGBIs should be encouraged. In clinical practice, assessing meal association in all patients with DGBIs could be of major importance for improving and individualizing treatment. Here, patients could benefit from a multidisciplinary care approach, including dietary and lifestyle advice, psychological support and pharmacological therapy.
Professor Ami Sperber, lead author of the 2021 Global Epidemiology Study of Functional Gastrointestinal Disorders (FGIDs)2, which found 40 percent of people worldwide have FGIDs or disorders of the gut/ brain axis, said the findings of Ms Colomier's study were of great interest.
"Many patients with disorders of gut-brain interactions (DGBI) such as irritable bowel syndrome and functional dyspepsia ascribe their symptoms to food and eating," Professor Sperber explained. "A major complaint is the development of pain following meals. However, there are no substantive data on this phenomenon, despite its potential significance for patient care and the study of the pathophysiology of these disorders."
"This research is the first to use the large database of the Rome Foundation Global Epidemiology Study to gain insight into meal-related abdominal pain and its significance. The authors' analyses of this database enabled an assessment of meal-related pain in over 20 DGBI in terms of diagnosis and potential associations with variables related to socio-demographic factors, psychosocial variables, and other variables."
"This has allowed Esther Colomier and her team to present a comprehensive picture of meal-related abdominal pain, its prevalence, societal burden, and its effect on the quality of life of patients with these very prevalent disorders."