US food safety officials have taken steps to ban the use of trans fats, saying they are a threat to health.

In the UK, it is more than 3 years since NICE (the UK's independent medical advisory body), urged the government to ban industrially-produced trans fats.  Their advice followed the World Health Orgnaisation's recognition in 2009 that trans fats are a toxin. See:  BBC News - Medics call for ban on trans-fats in UK food

Instead, however, the UK govt chose to rely purely on 'voluntary agreements' with industry to reduce or remove trans fats. According to expert commentators, this still leaves the UK population exposed to unnecessary and serious health risks.

See also: The Independent - Dying for a burger? Why are trans fats still legal in the UK?

The regulator said a ban could prevent 7,000 deaths and 20,000 heart attacks in the US each year.

The FDA is opening a 60-day consultation period on the plan, which would gradually phase out trans fats.

"The FDA's action today is an important step toward protecting more Americans from the potential dangers of trans fat."

If the agency's plan is successful, the heart-clogging oils would be considered food additives and could not be used in food unless officially approved.

The ruling does not affect foods with naturally occurring trans fats, which are present in small amounts in certain meat and dairy products. 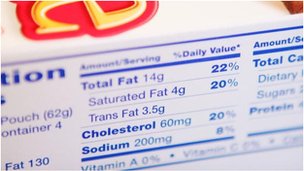 Source: US Food and Drug Administration

Nutritionists have long criticised their use, saying they contribute to heart disease more than saturated fat.

Some companies have already phased out trans fats, prompted by new nutritional labels introduced in 2006 requiring it to be listed on food packaging.

New York City and some other local governments have also banned it.

But trans fats persist primarily in processed foods - including some microwave popcorns and frozen pizzas - and in restaurants that use the oils for frying.

The American Heart Association said the FDA's proposal was a step forward in the battle against heart disease.

"We commend the FDA for responding to the numerous concerns and evidence submitted over the years about the dangers of this industrially produced ingredient," said its chief executive, Nancy Brown.

"The groundbreaking public health policies we have adopted here in New York City have become a model for the nation for one reason: they've worked," he said.